The legendary Begfest Guitar Raffle goes from strength to strength.

Here we see the Begfest guitar raffle prize – yet again hand crafted by the ever generous Mr Andy Francis, presented by Begfests’ Jane T. to our lucky winner…….. 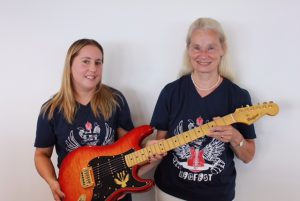 The Beast of Begfest V 2016 Raffle Guitar was won initially by Carolyn Philp who selflessly donated the prize to Rhiannon, who donated it to Lynne, who, having won one at Begfest before, selflessly donated it to an immediate on-site auction won by Mr John Welch for a staggeringly generous figure. Well done one and all and many thanks for your generosity in supporting our causes.

The Beast of Begfest III went on to perform sterling service in Northamptonshire – Raising another 1200 pounds for Thomas’ Fund after being very generously redonated for re-raffling by its lucky winner.  Just goes to show Begfesters are jolly nice people.  Well done sir !

The late Alan Cunningham demonstrates SON OF BEAST OF BEGFEST II in 2014.

The Son Of Beast of Begfest II now resides in Penzance with its new owner, Lyn.    She hopes to train it in time for the 2016 Western Counties Wurzel Impersonator Agility Competition.  If it fails to win, the Beast will be customised by Kirsty Alsopp and entered in the Helston Womens Institute Slipknot Bonnet contest

Tombo demonstrates the BEAST OF BEGFEST with a facemelter   …………………

………………Which seems to have melted this mans face